Monday was my final day at the natural history museum in Berlin.  It had been a fantastic week and I had a weekend full of sightseeing and walking and visiting interesting places in the city.  It’s a beautiful place and I recommend it to anyone with an interest in culture, museums, history, architecture, shopping, good food, better beer and friendly locals.

My last was spent with the mammal group.  This was of particular interest to me because the following week I would be spending five days at the NHM in London, working in the mammal department.

I was collected by Detlef Wilborn and Peter Giere in the morning.  The former is the mammal collections manager; the latter is head of the embryological collection, as well the man that sorted my week out for me.  We had a quick chat about how my week had been and what I expected from my last day, then Detlef proceeded to take me around his collections.

We started in the attic, where the skeletons of the large mammals had recently been moved.  They were stored previously in location within the main body of the museum but the area was needed for labs.  The only place with enough space for all the boxes of hoofed-mammals was the attic.  This is not ideal because it is freezing in the winter and unbearably hot in the summer.

Such temperature fluctuations are usually detrimental to the preservation of the material.  The bones are stored in boxes.  Some of them are the original wooden ones with all the old labels attached (or not, as the case may be).  They are not all defatted, either.  There are, as always, so many and defatting and drying bones properly takes a fair amount of time. 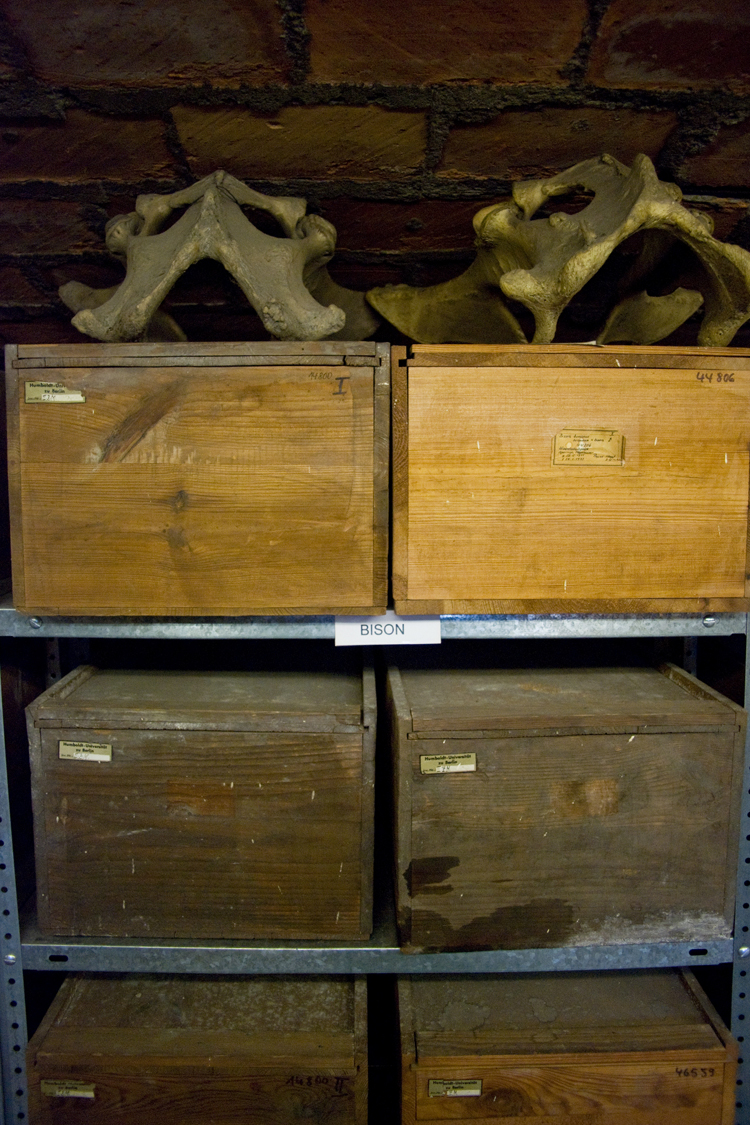 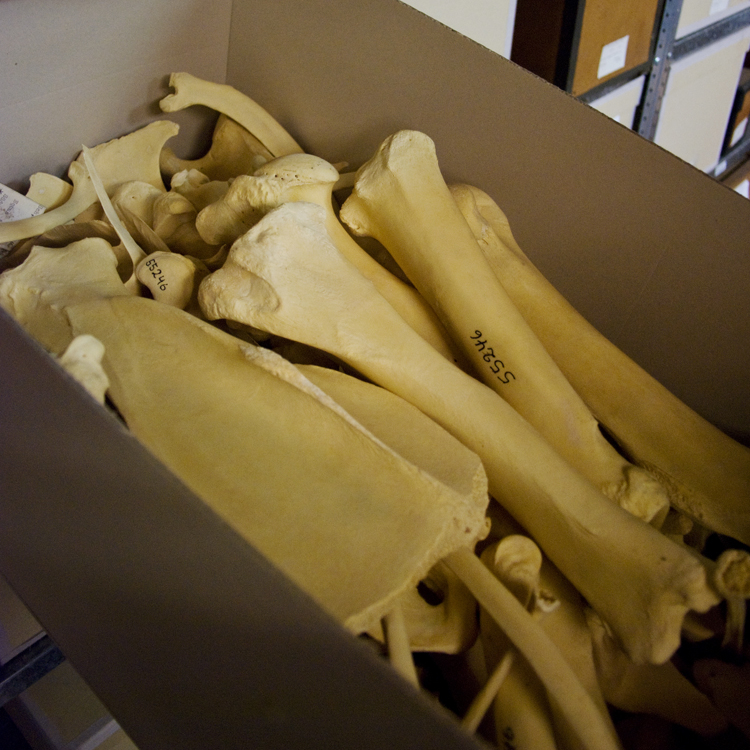 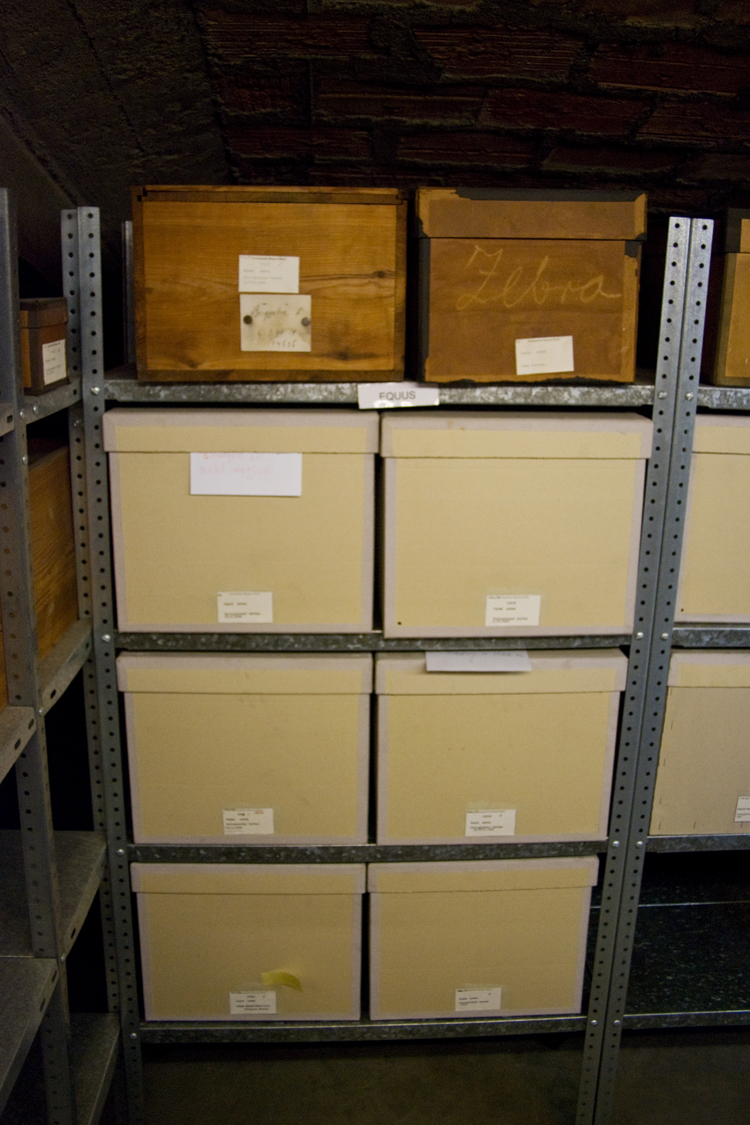 After Detlef has shown me the attic store room, he took me into the skull store.  When a mammal comes into the museum it will be stored/preserved as a combination of: a skull, a skeleton, a skin and a whole animal.  They are all kept separately unless the skull is used in a taxidermy mount in which case it is with the skin.  Sometimes only the skin is kept, or only the skull; sometimes all of it (in which case the individual parts are stored in the relevant areas).  All parts are labelled and numbered in a way that allows the curators and visitors to know that there is more of that animal available.  So, the skull store… 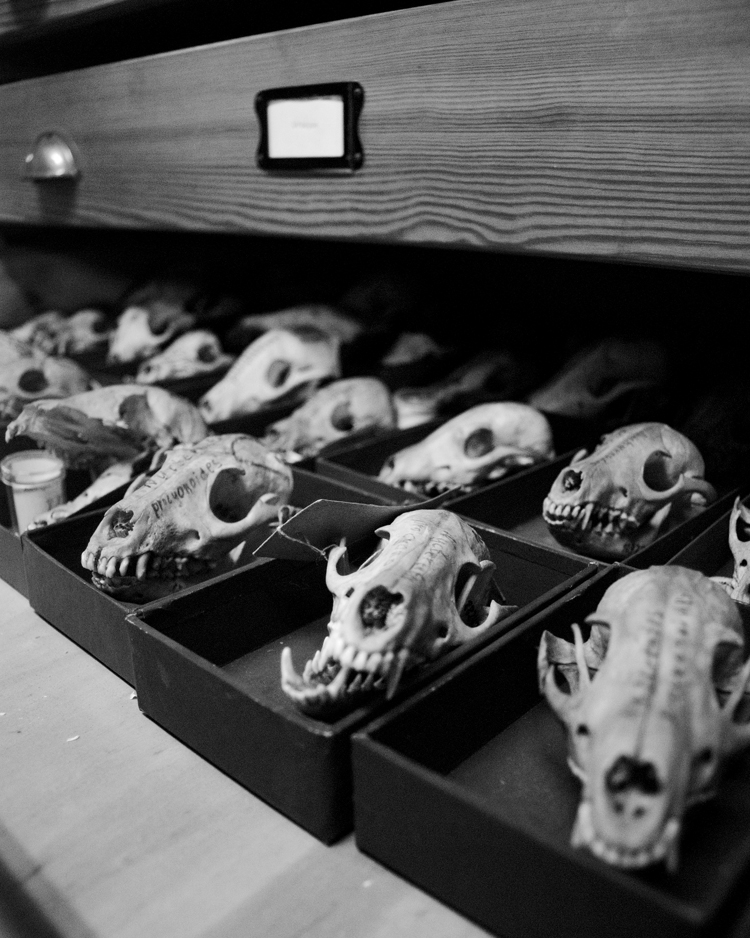 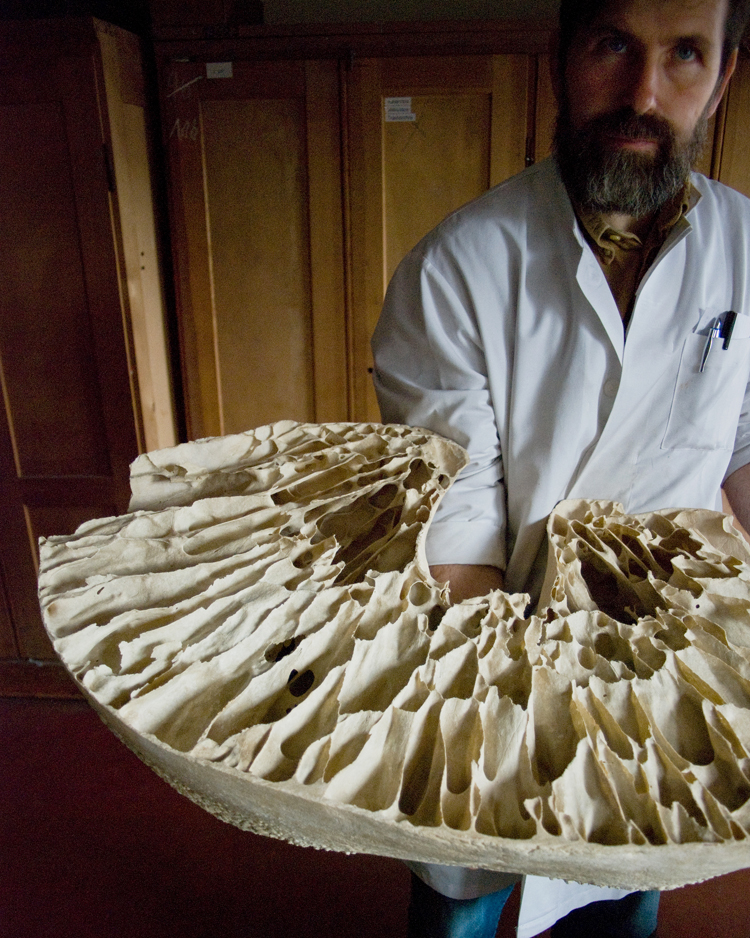 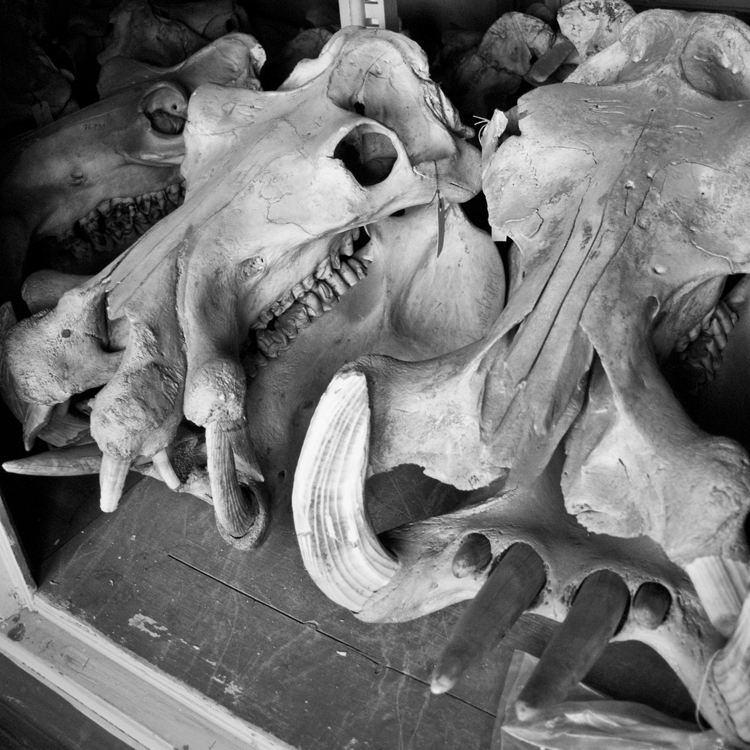 After we had looked at the skulls in detail and I had a good overview, Detlef showed me to the skin collection.  There were small and large mammal skins in a new store room which was about to be fully renovated.  This means that all the skins will have to be moved out, stored elsewhere, and then moved back in.  This has to be done whilst considering pest management (so freezing the skins as they go in and out of the store room), as well as the locations and systematic order in the collection. 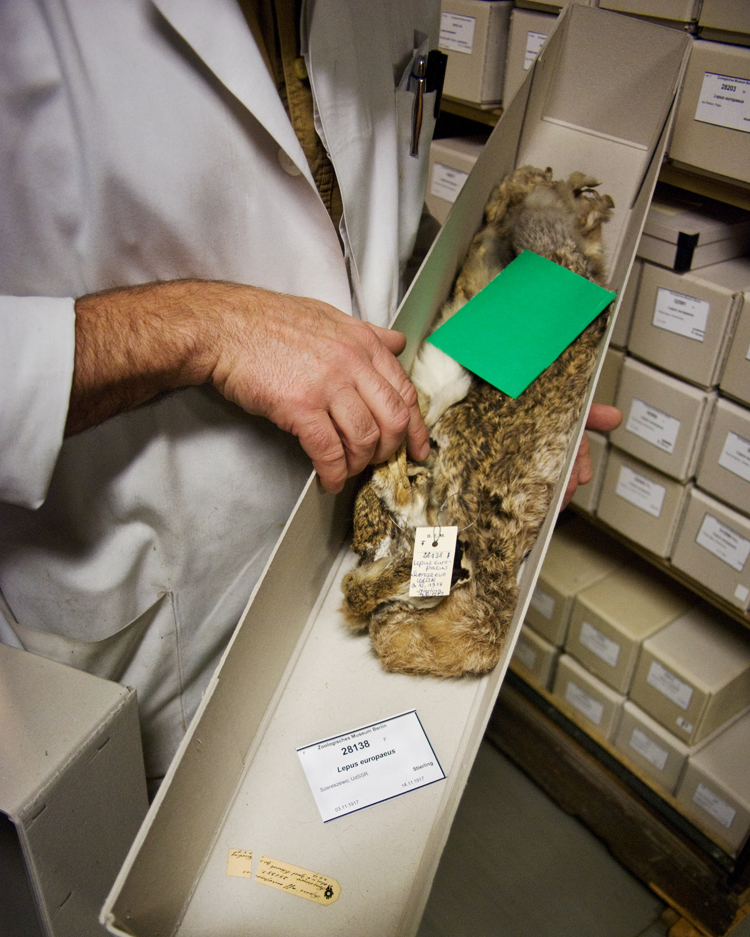 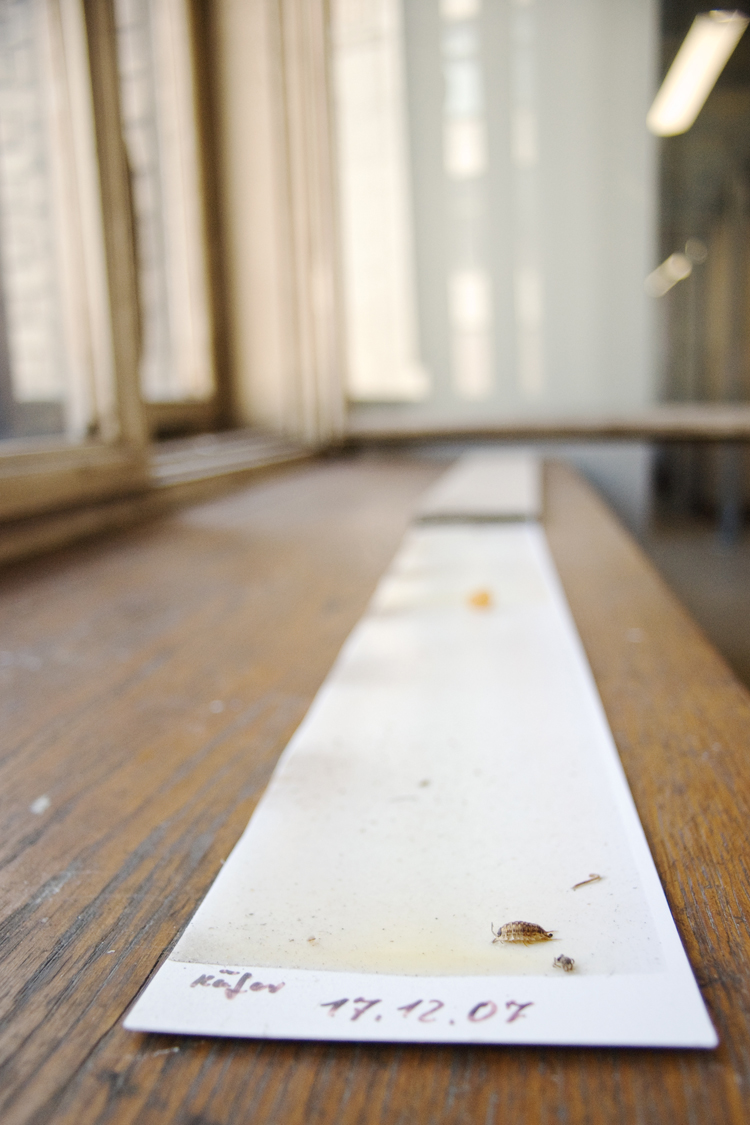 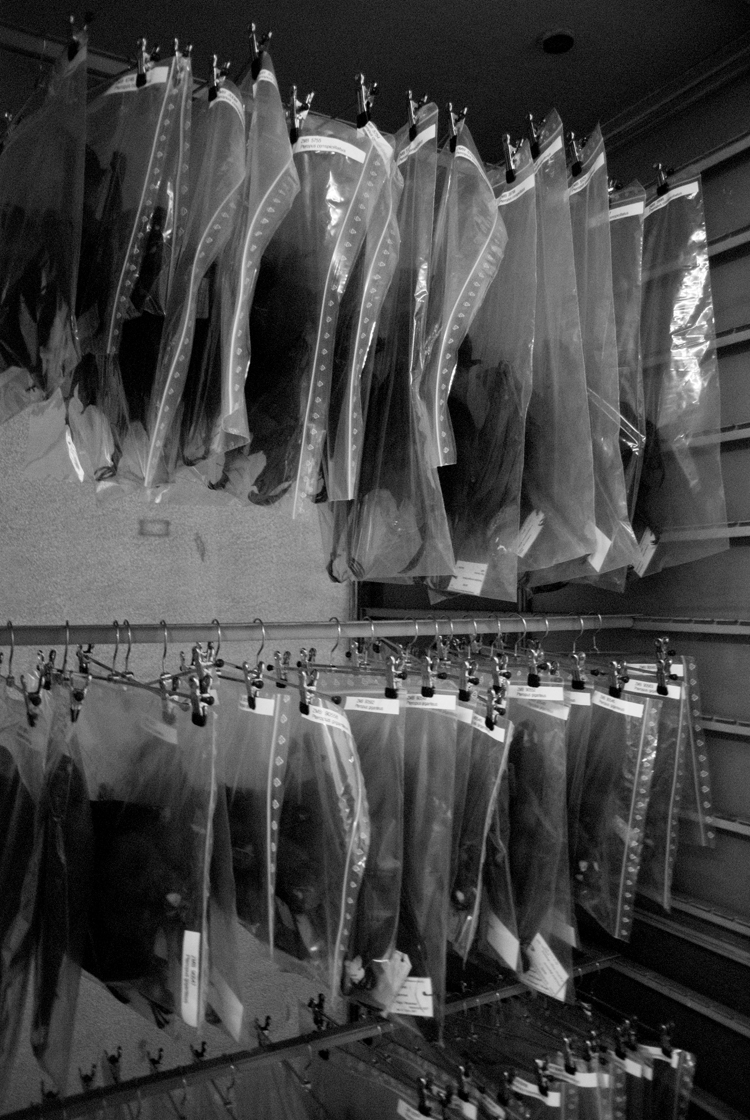 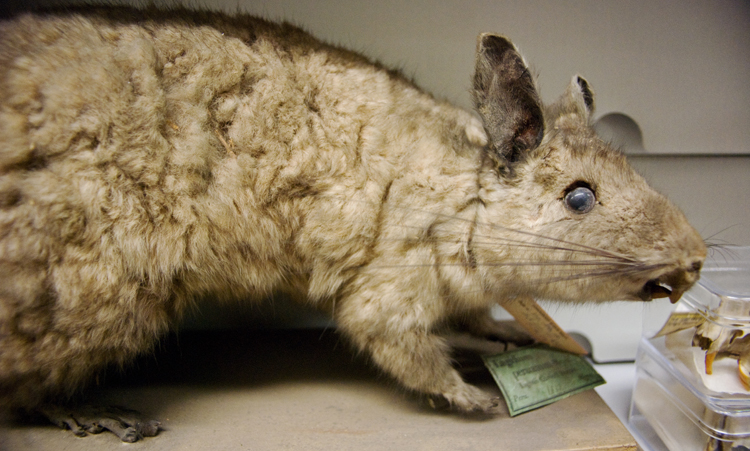 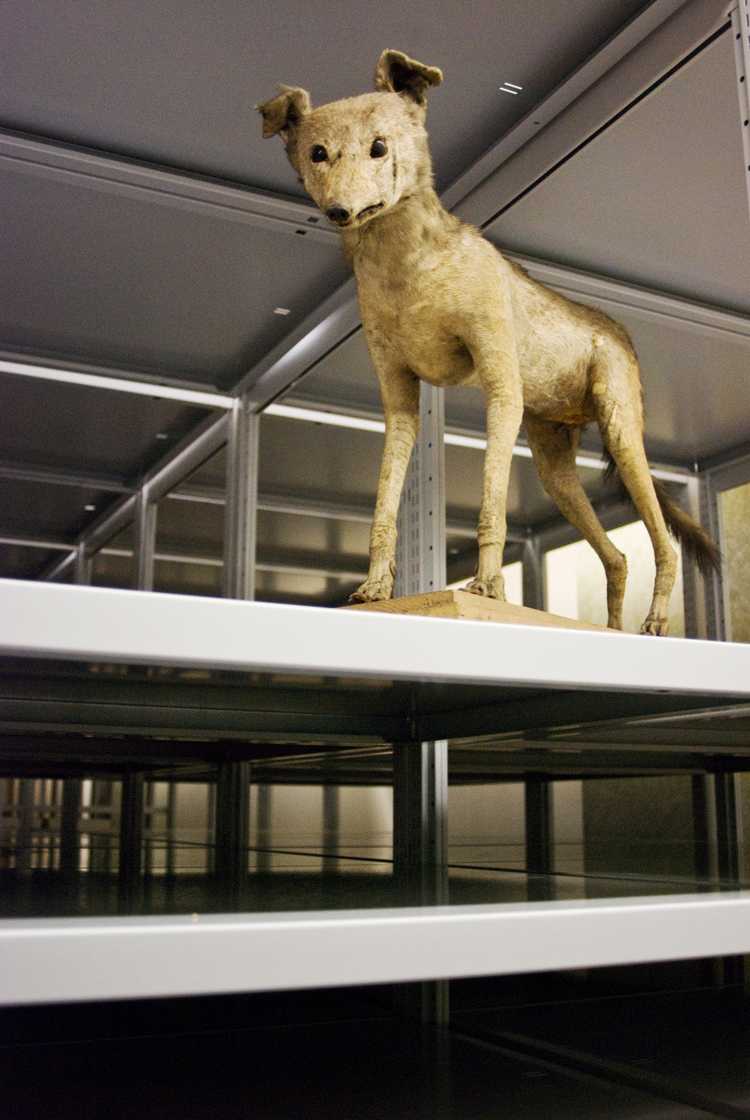 We moved on from the type store and into the spirit collection.  Detlef, like Anja the day before, didn’t mind my taking photographs so I snapped away at all the wonders held in the glimmering glasses.  Detlef is entirely against the twist-off jars.  Most other departments, as touched on in previous posts, have (or are in the process of) changing the old jars for the much cheaper ones.  Detlef sees them as little more than jam jars and refuses to let his specimens be housed in them.. The lids rust and break down and need to be replaced constantly and although other curators prefer this to the high cost of the better jars, Detlef does not, and hoped to eventually transfer all of his collection into the expensive bottles.  For now, he’s happy with the old bottles. Have a look at some of the specimens: 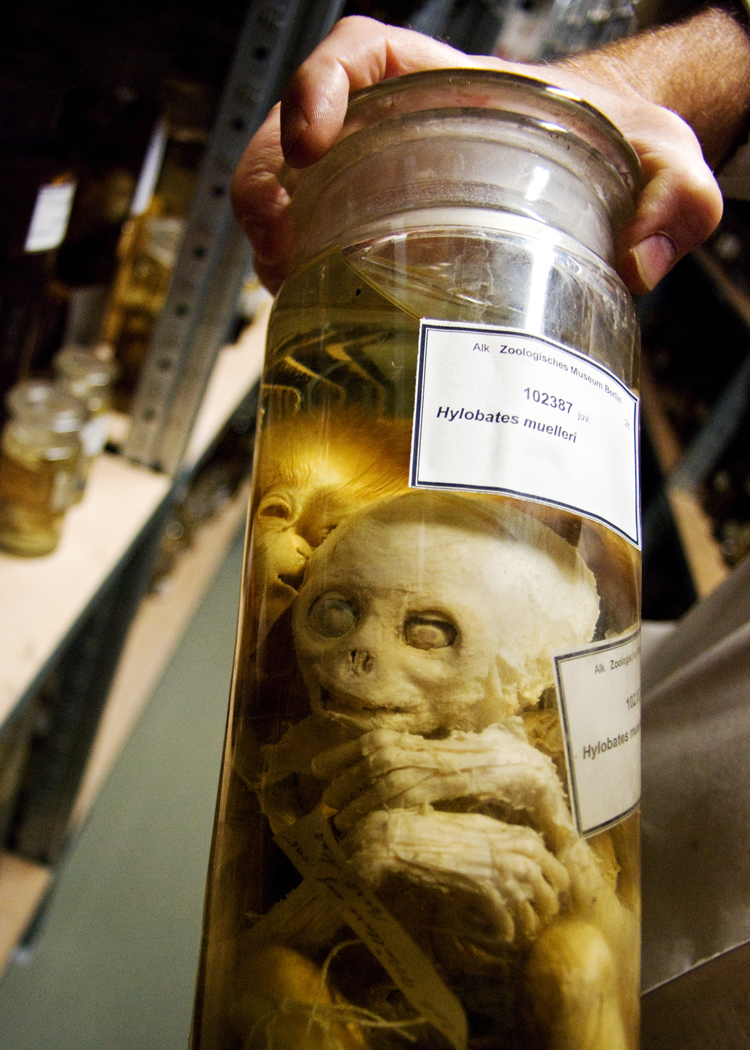 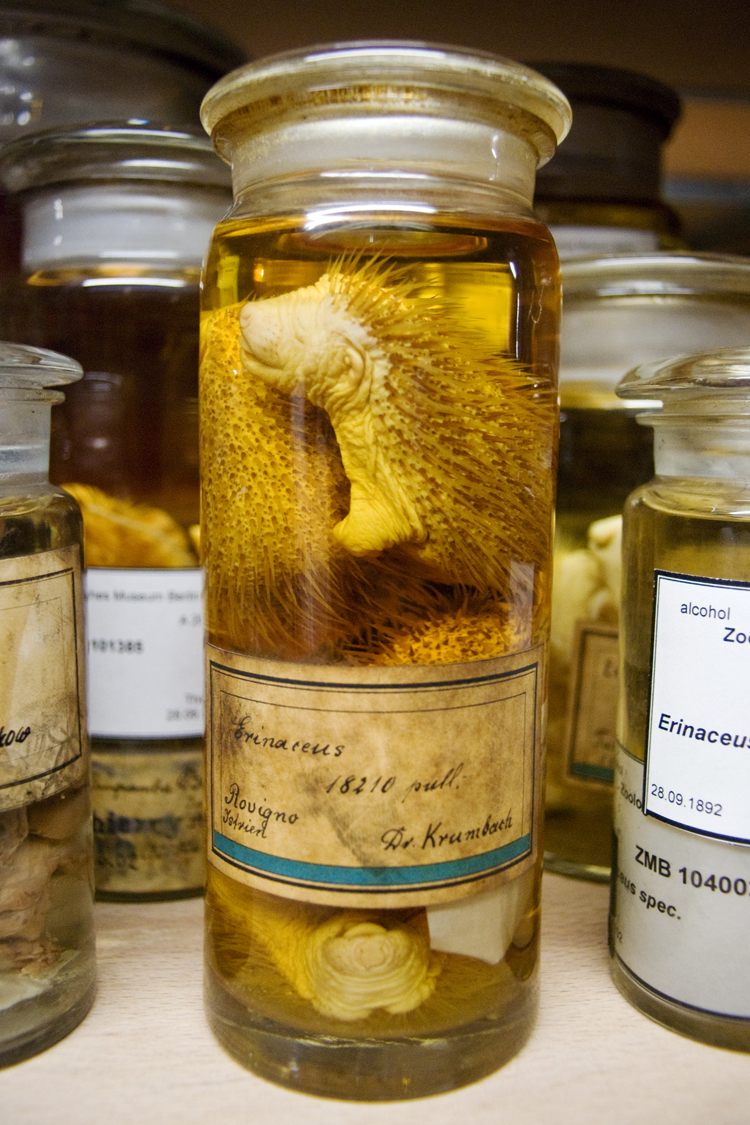 After the spirit collection we paid the basement a quick visit to see some of the heavier and larger objects.  These include the elephant skulls as well as those skulls of animals which have dramatic and heavy adornments.

Once Detlef had shown me everything he could (and he had shown me a lot) he passed me back to Peter.  Peter then took me to see the embryological collection of slides.  They are made up of several people’s collections and are slide preparations of many different kinds of animal embryos. They are pretty and cool to look at.  the process of preparing them is interesting too.

This was the end of my day and the end of my time at the Berlin museum.  I had a blast and learned and saw a lot.  Conducting the whole visit in German was a challenge but one that I managed.  I was complimented on my skills with the language and praised for being the only visitor they’d had from overseas that could communicate at that level. So that was nice!

I am glad I was able to visit the museum and show you what goes on there and what they have.  I hope it was fractionally as interesting for you to read as it was for me to experience.  My next stop on my traineeship is my second week at the NHM in London, in the mammal department in zoology.  My next blog will be from there.