I blogged a few months ago about how the Bioblitz project was going after we had completed the first three reviews. I discussed the bird, mammal and reptile Bioblitzes. Now some time has passed, I can fill you in on the rest of the review events. Check out the project page and Horniman blog to get an understanding/refresher of what we’re trying to achieve.

We’re still tweeting from @HornimanReviews and using Flickr to showcase my images so be sure to head over there and give us some love. As mentioned in a previous post, Jo and I presented the Project at the last NatSCA conference in York. It went well and we received some great feedback (and were even approached by Kathie Way offering to look at our molluscs). Here’s a recently updated presentation to give you a bit more background to the project.

It’s been a busy spring and summer so far with an additional five review events behind us. We’re nearly finished with the reviews and will be focusing on community engagement and disseminating the results. For now, I want to introduce you to some more of the experts we’ve worked with as well as some of the cool specimens we’ve found.

Starting from where I left off, the next review was entomology. Many hundreds of drawers of arthropod specimens is a very different prospect to the vertebrate material we looked at. Howard Mendel joined us for three days to take a look at our almost 100,000  specimens. In advance of his arrival, we first had to empty the entom store room. It’s a very small space with a couple of dozen insect cabinets rubik’s cubed in there. To ensure every drawer would be accessible, almost every cabinet was taken out, its drawers wiped and cleaned (the glass) and then positioned in one of the halls in the Horniman’s collection store, ready for Howard’s critical eyes. 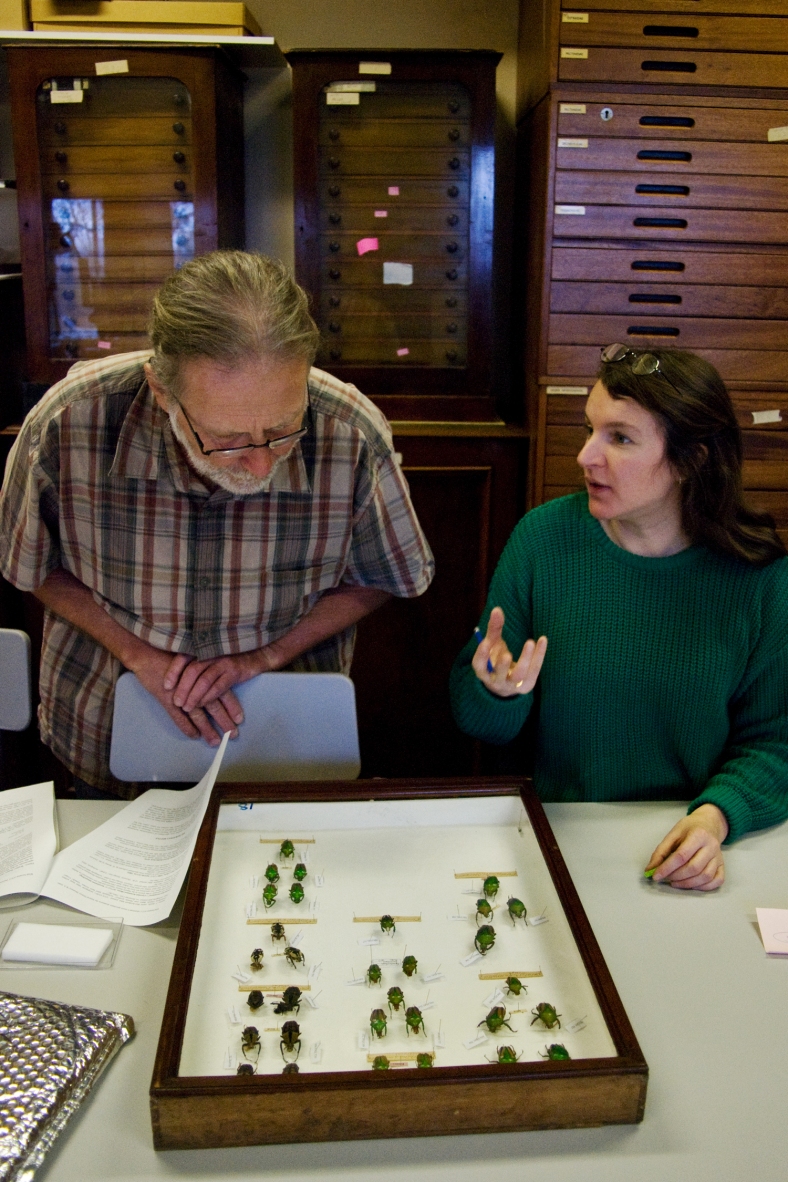 Howard undertaking some research with the Horniman Butterfly (a type specimen) in the foreground.

Jo and Howard getting down to details.

Howard would occasionally check individual specimens if they caught his eye for some reason.

Jo surveys her kingdom: blown out and mounted caterpillars.

There were a lot of specimens to look through…

The mollusc Bioblitz is the only review event I was not present for. Although it felt odd to not be there to capture the magic, it went well and Jon Ablett and Kathie Way from the NHM were great. I saw Kathie as she went through some of the mollusc material at the museum itself and include those photos here. Visit the Horniman’s blog to hear more about what they found.

Kathie with Jo and Paolo at the museum looking through a mollusc cabinet. 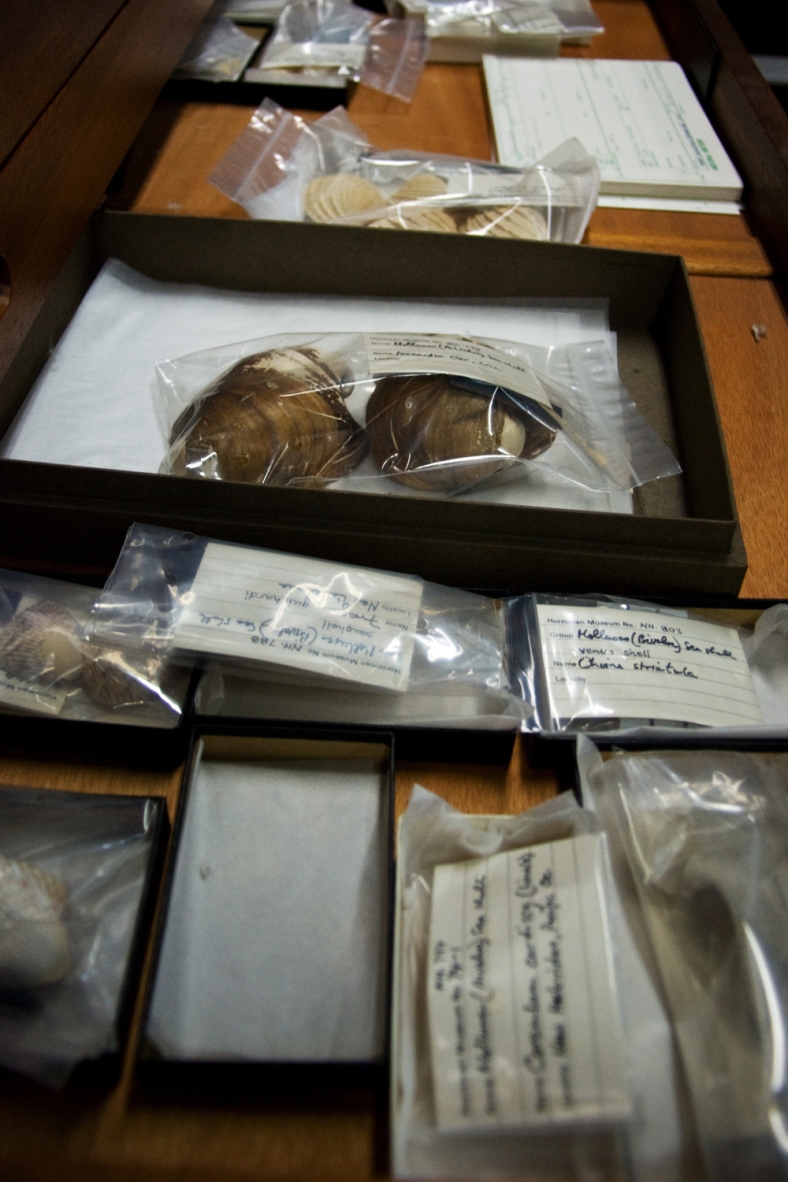 A lot of the mollusc material has data. We now need to do some further research to find out how good or usable the data is. 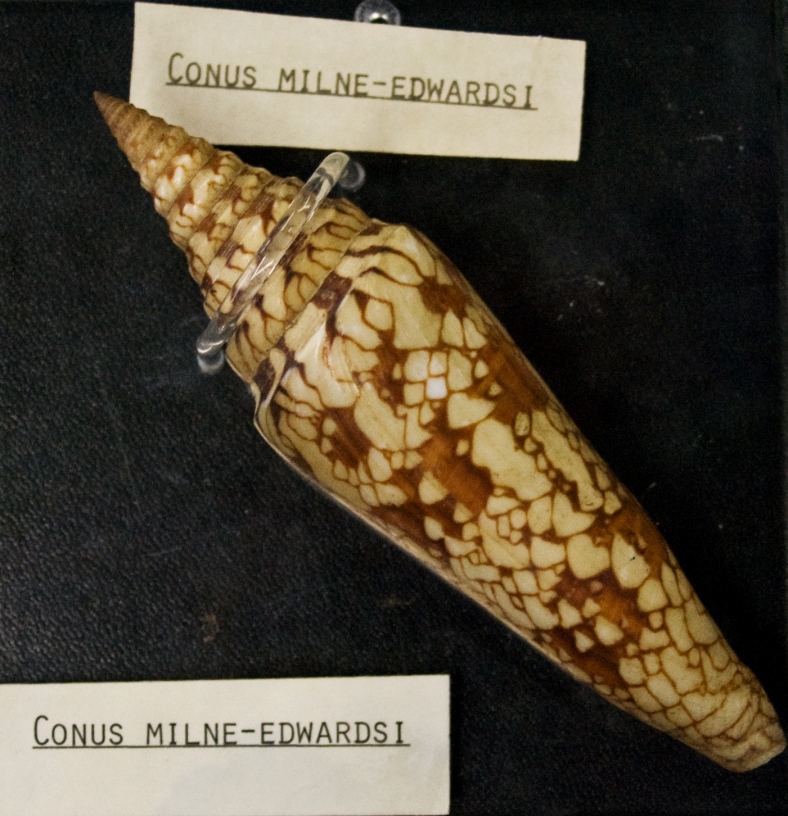 “These snails are predatory and venomous. They are capable of “stinging” humans, therefore live ones should be handled carefully or not at all.” Ha.

Not the shiniest mollusc specimen we have… 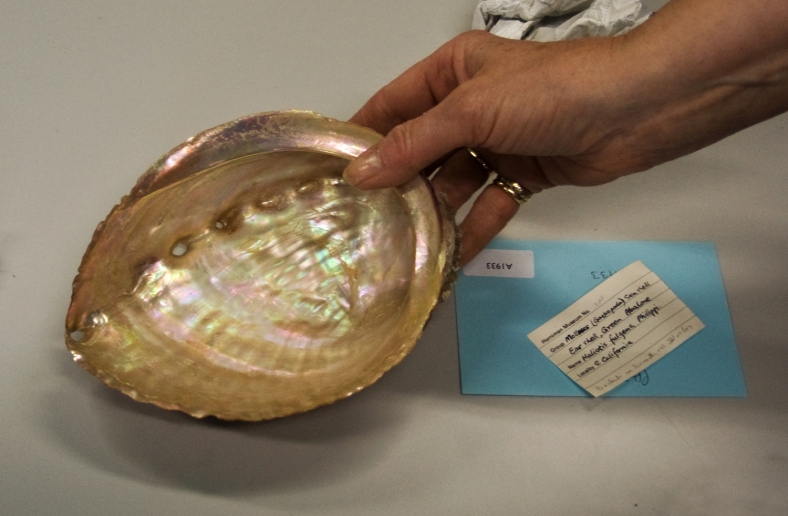 This green abalone is pretty, though.

One of the very few photos of me during the bioblitzes.

This group includes crustaceans, corals, sponges and echinoderms (and doesn’t include molluscs since they were looked at separately). Roger Bamber was our expert reviewer for this material and spent three days looking through a whole variety of specimens. Sadly, this group, although incredibly dynamic and glorious when living, lose a lot of their charm once dead and dried. Just to give you an idea of how wonderful marine invertebrates are, check out this Flickr profile for some truly amazing shots. A lot of the marine invert specimens are in the fluid collection store which made for an interesting day. Four of us crammed in the small, claustrophobic space with lovely fumes and loud extractor fans. For more detail about what we found, see here. 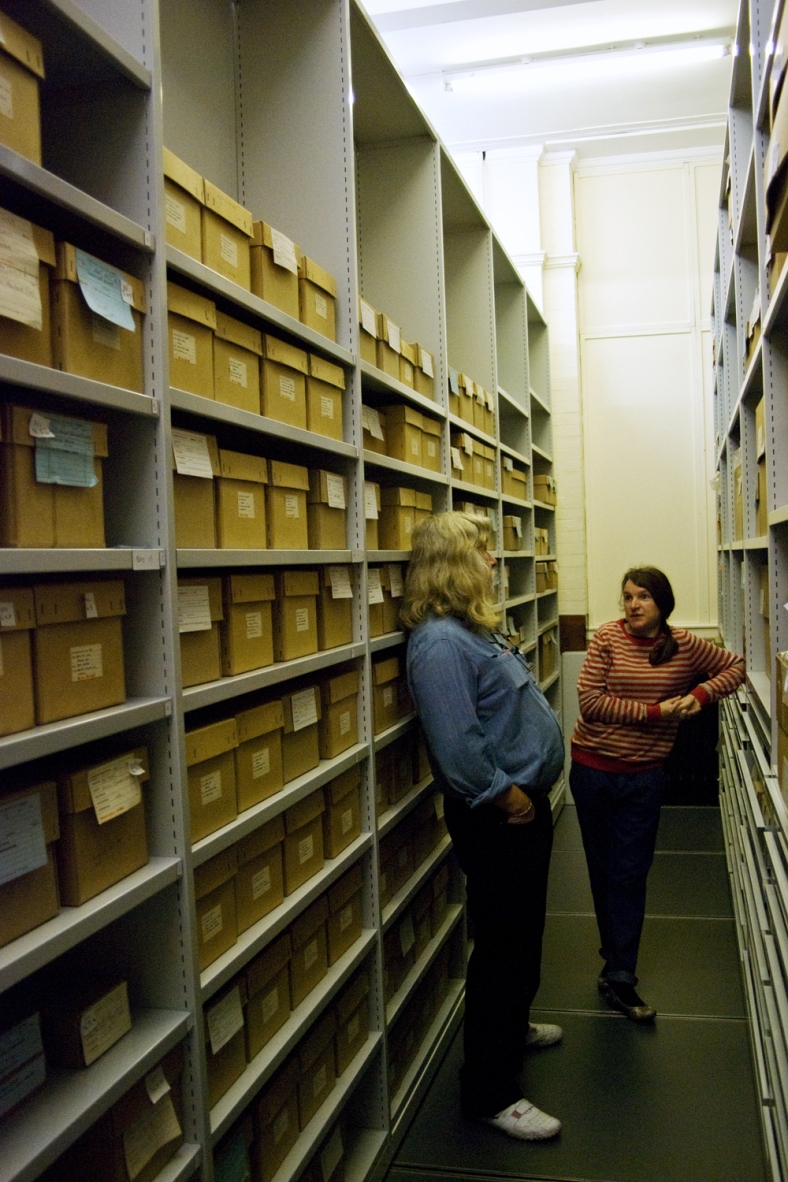 Roger and Jo talking over the Bioblitz methodology. 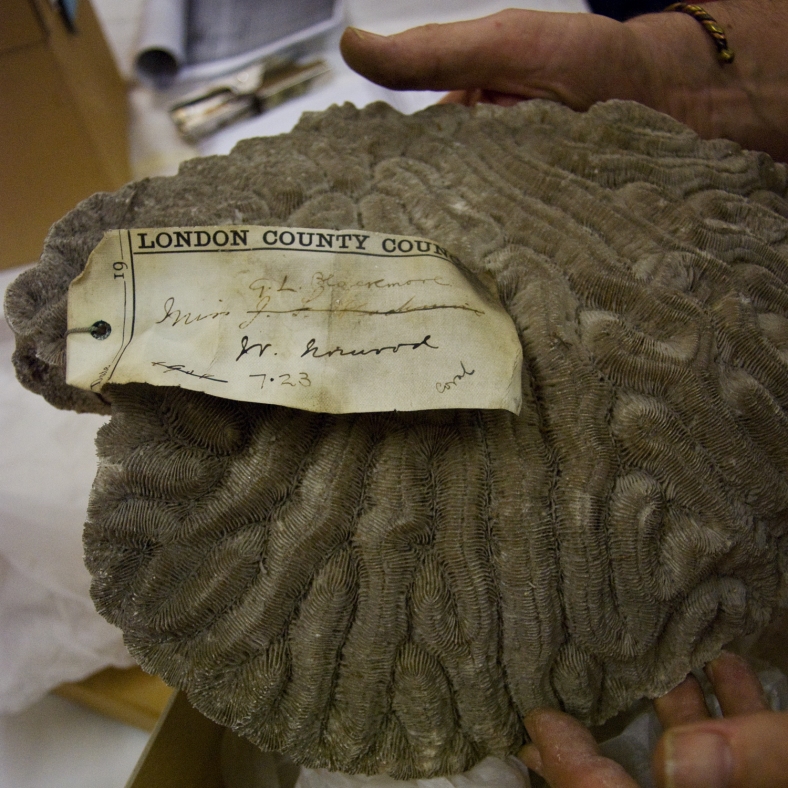 A large grey piece of coral. Yep, grey…like almost everything else we looked at.

An orange crab provides a dash of colour.

Some coral doesn’t need to be colourful to be pretty, like this black coral.

Roger peering into a box with…excitement? 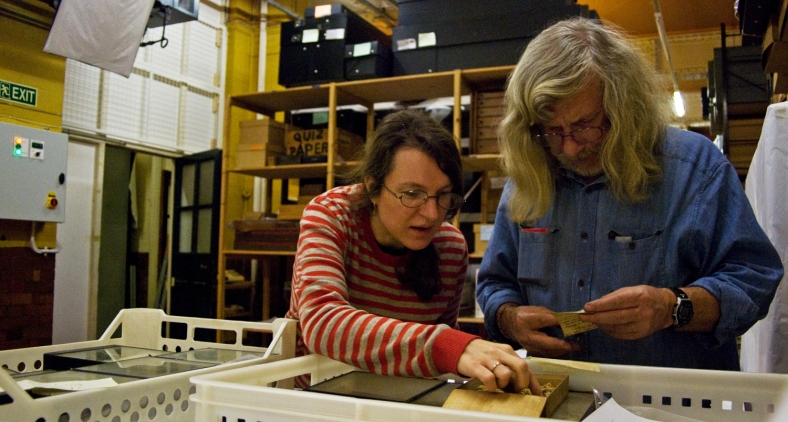 Jo and Roger have a poke about.

Jo and Roger in the fluid container. This sea mouse is still gorgeously iridescent. 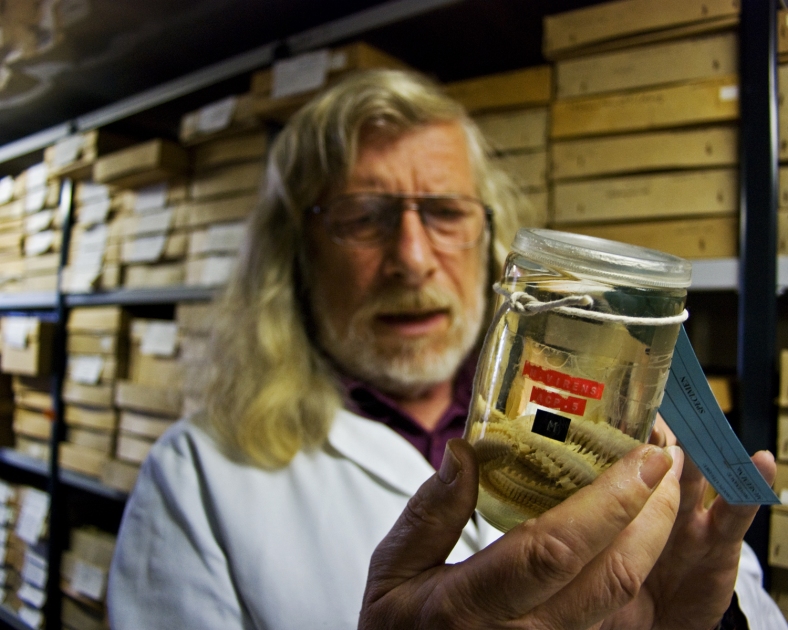 Another polychaete worm but this time, not as colourful. 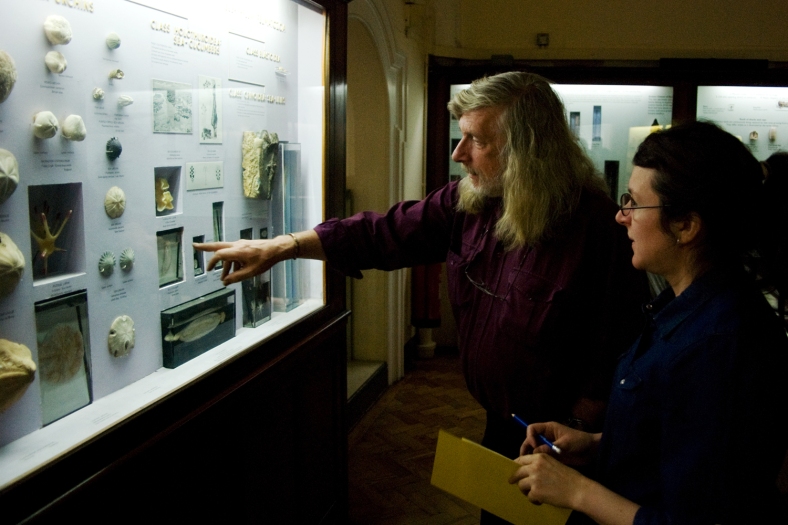 Back at the museum, Roger and Jo go round the gallery.

Some of the marine invert material is kept in the natural history office at the museum.

Roger pondering our coral display. Could it do with updating?

The other two reviews were the geology ones (minerals and fossils). I’ll write a post about these (and the last remaining future Bioblitzes) soon. For now, I hope these three reviews were of interest and give you an idea of how we’re approaching this process.